Fix your TV with no tools. Television repair guide… As little as ten years ago, the difference between a television and a computer monitor was pretty significant. Sure, they both show you lit images on a screen based on digital signals but how they were made varied a surprising amount. These days, however, with all the video streaming and online services, the line between television and monitor is much smaller. In reality, the only major difference these days are built-in features, how big the screens can get, and the variety of ports in the back. 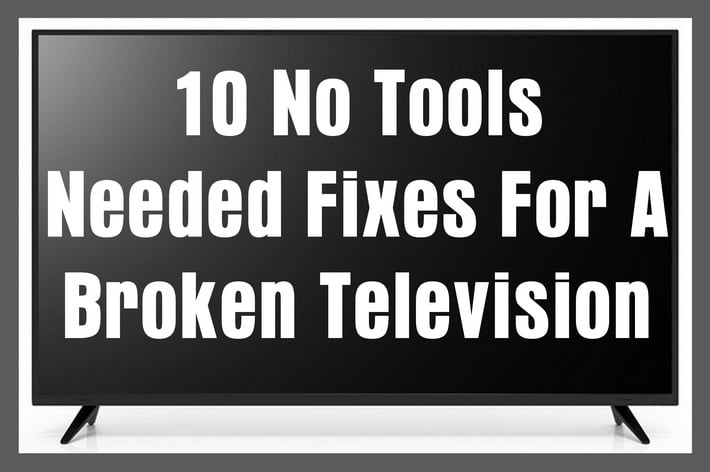 10 No Tools Needed Fixes For A Broken Television

All that said, it can still be frustrating when your TV stops working. Many people rely on their televisions not only to track favorite shows but also to keep them company during work and chores. When, one day, your television starts fuzzing out, just won’t come on, or stops responding to your cable box, it’s time to start troubleshooting. The good news is that the first nine troubleshooting steps don’t even require a screwdriver. Let’s begin…

1) Test the Outlet
If your television has stopped coming on at all, not even a little yellow light in the corner, then your problem might actually be power rather than the TV itself. Grab a lamp and unplug your television. Test both outlets where your tv has been plugged in to see if they can power the bulb. If the lamp comes on, re-plug your tv into the working outlet and move on. If the lamp doesn’t come on, check for a flipped breaker or use an extension cord to connect to a different outlet that does work with the lamp.

2) Disconnect and Reconnect All Cables
One of the most common ‘problems’ with modern televisions and computer monitors is that these smooth HDMI and USB connections can slide out of place with surprising ease. They often still look like they’re in place even if they’ve wiggled out of the actual connection. If your television turns on but it insists that there is “No Signal” from your computer, cable box, or console, the first solution is to simply unplug each connection and then plug it back in firmly, making sure each cable end is pushed firmly and evenly into place. Now test to see if you can get a signal.

If this doesn’t work on the TV end, don’t forget to re-secure cables from the signal devices as well. Fully unplug the HDMI or specialty cable from the port in the back of the device and the push it firmly back into place. 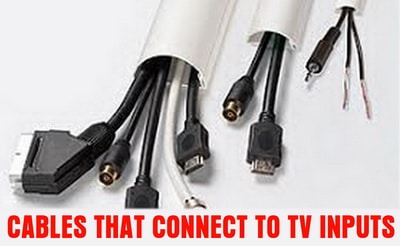 3) Reboot Your Cable Box
Sometimes after a cable connection is lost, a device will fail to acknowledge that the connection has been re-established by your re-plugging procedures. To check and see if this is the problem, reboot your cable box or other signal devices like your computer or gaming console. You may also want to toggle the television off and back on at the same time to make sure every device is looking for a fresh signal.

See also  Samsung Refrigerator OF OF Code On Display - How To Clear?

4) Switch Cable Ports and Input Channels
Just like the power outlet test, your problem may be with a dead cable, port, or channel in the television. Start by switching which port you’re using for each cable and testing the newly plugged channel. For example, if you’re using HDMI 1, test the cable in HDMI 2 to see if that one is able to get signal.

5) Try Another Input Source
Maybe the problem isn’t your television but is actually the signal device. Using a cable box as an example, unplug the HDMI cable from the back of the cable box and plug it into the back of your computer or gaming console instead. If you can get signal from the computer, the cable, port, and television are fine and you should be calling your cable company.

There are a lot of things that can go wrong with a modern television and they don’t all have to do with the internal mechanisms. More often than not, the issue is with the power, a disconnected or faulty cable, or the settings on your television. Last time, we talked about the difference between modern TVs and Computer monitors, how to test your TV’s power outlet, and began playing with cables to see what works. Let’s pick up where we left off at what could be going on with your TV settings that might make your television seem broken when it isn’t.

6) Check the TV’s Settings
Here’s one that trips up a lot of people. The TV itself has settings like which input channel it’s set to display, but there are also other things. If the brightness, contrast, or backlight has been changed by someone sitting on a remote, for example, you may be having a terrible time seeing what’s on the screen. If your television has been set to the wrong input channel, you may be seeing ‘No Signal’ even if your devices, cables, and ports are all in working order. Your remote should allow you to access a menu of settings that should be returned to ‘default’ in all cases. If you can’t find the menu, look up your model of television and figure out how to access these settings.

7) Test Each Cable Individually
Another tricky situation is when a cable has finally given up the ghost or, worse, only works sometimes. Visual signs of a damaged cable can include fraying, split plastic casing, clear signs of tight twisting, and a bent tip that is often the result of a cable pulled too tightly at an angle. If you can, test each cable you’re using individually to see if it can convey any signal at all using working devices that you know are working like your computer and monitor.

See also  Is It Possible To DIY Solar Panels On Your House?

8) Clear the Way for Remote Signals
There are a lot of new ways to send signal through the air but many televisions and their remotes still work with infra-red signal. What this means is that you need a clear direct line between the remote the single point on the television that is a signal receiver, often somewhere along the bottom. If your remote has recently stopped working, this might be because you have stacked something infront of the television that blocks its signal receiver. Find the receiver location for your model of television and make sure that it can ‘see’ most of the room and especially wherever you sit to watch television.

9) Clean the Television and Ports
As you reach the end of the no-screwdriver troubleshooting methods, one of your final recourses is to check and see if built up dust or recent food spills are somehow the cause of your television’s misbehavior. Grease on the signal receiver, sticky jam residue on the ends of cables, and dust on everything can cause signal problems between cables and ports and between the remote and the television. In fact, if you haven’t moved your TV in a while, dust on the internal mechanisms might even be the problem.

Use either a microfiber cloth or paper towels and gentle class cleaner to wipe down the frame and screen of your television, then pay special attention to the ports. Pull each cable and thoroughly wipe down the ends, then use a cotton swab dipped in glass cleaner or rubbing alcohol to carefully clean out the ports in case anything greasy or sticky managed to get in. Do the same thing at the other end of each cable with your input devices.

10) Plug Everything Back In
Finally, now that everything about your television, cables, and input devices has been checked and cleaned, your final recourse is to see if putting everything back perfectly fixes the problem. Plug all the cables into their correct ports, make sure your television settings are correct, and reboot all devices. If it comes on working, than one of the last ten troubleshooting steps did the trick. If not, it’s time to get serious.

BONUS FIX: Get a Screwdriver and a Soldering Iron – This will involve opening the TV and troubleshooting if you have a TV Circuit Board Popped Capacitors or a bad board.

If you need help with finding television repair manuals, they are here.

If you need help with how to fix a tv with no picture, here is the info.

You have now covered all of the easy ways to troubleshoot and fix a misbehaving television. All future steps will require a certain amount of electrical know-how and possibly a little confidence with a soldering iron. For more in-depth repair steps depending on the make, model, and misbehavior of your television, contact us below.